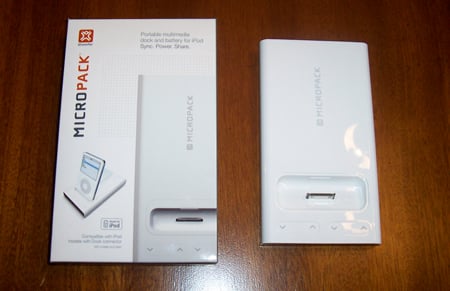 The XtremeMac MicroPack is billed as a “super dock” for the iPod. Why? Because it’s a charger, a battery back up, a stand for viewing video, a splitter with multiple headset outs with individual volume controls for each, and a video out for watching your iPod videos on a television. So yeah…I think that qualifies as a “super dock”…you know, assuming that they all work properly.

So the real question is, do they? 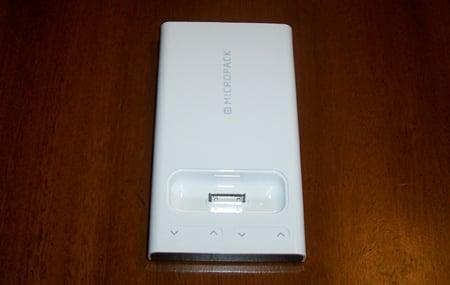 The MicroPack itself is a pretty slender and attractive looking dock. It’s thin and has clean straight lines, making it fit right in with your iPod’s look and feel. 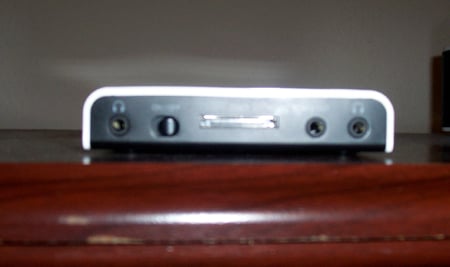 The back of the device has a Video out and two input jacks for head phones, as well as the standard iPod connector slot. The head phone jacks work really well, with the individual volume controls both functioning nicely. The TV out also works as you would expect it to…as long as you remember to turn the “output to tv” option on your iPod on.

The iPod connector allows you to use the device as a dock for syncing with your computer, and this also serves to charge the lithium ion battery that serves as a battery back up for your iPod if you are ever in a location without power, or would prefer to go wireless even when your iPod is about out of battery life.

The back up battery does not charge the iPod itself, it merely serves as an alternative battery source for the iPod. It is extremely useful, and would be a great addition to any camping trip, or a value able asset for long flights. 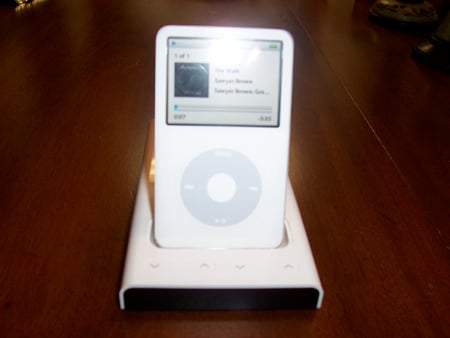 When you dock an iPod in the device it sits at an angle that reduces glare, making it easy to watch videos on. (this image is a bad example…what with the glare and all). I like watching videos on my iPod, usually podcasts or shows like The Office without too much movement, and this provides an excellent way to do that. 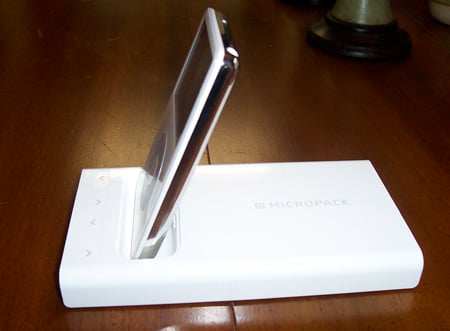 You can see from the side view here that the Micropack is a little long. I assume that is because of the back up battery, but it is worth noting that this is twice the size of a typical dock. 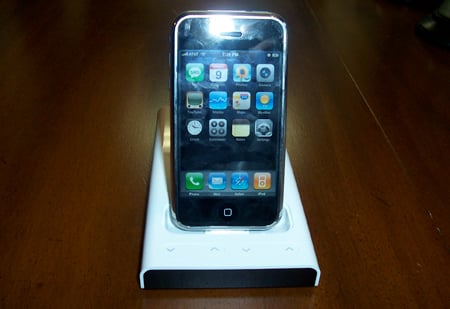 You might also be interested to know that in my testing I found that it works well with my iPhone too. The headset outputs work, the battery back up works, and it syncs with iTunes as well. The only thing that doesn’t seem to work is the video out. It is also hard to watch videos on the iPhone while in the dock, as all the iPhone videos are in landscape mode.

All in all, I have only one negative thing to say about the Micropack.

No usb cable for syncing, and no video out cable for watching television. I guess XtremeMac assumes you already have these, and in most cases you probably do, but it’s annoying that neither of them are included in the box. Although, with an MSRP of $79.95 it’s hard to gripe about the cables. The battery back up alone is worth that.

If you travel, I would say that the XtremeMac Micropack is probably a must have dock. It seems tailor made for travelers, and it’s reasonably priced for what it does – but it does lose points for not at least having the video cables in the box.