Why They Won’t Win

by Kevin Whipps 12 years ago3 months ago
4 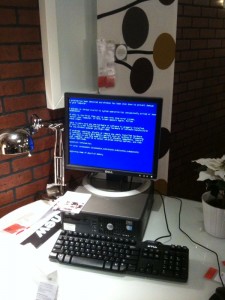 There’s a great article written by Jason Schwarz at The Street which I recently discovered, which talks about why companies like Google, Samsung and Microsoft just aren’t going to beat Apple handedly with any old product. It’s a fascinating read, so I’ll let you all check it out, but here’s a few of my thoughts on the subject.

It took me three years to buy an iPod. That’s right, three years. I just couldn’t justify spending that amount of money on a music player. After all, I had Walkmans and Discmans, and they all played at least one format, no matter who manufactured the player, so it didn’t matter. By buying an iPod, I’d be sinking all of my music into one format, then succumbing to that company’s whims as to where it goes. Who knows, it could disappear and go away tomorrow, so why invest? But one day, I bit the bullet and bought a shiny new iPod Photo, and I still have it today, sitting in my truck.

Contrast that to my wife’s story. While I was ripping music to my PC to put on iTunes, she was ripping them to Windows Media Player. She had no way to listen to them other than through the computer, and although that wasn’t a big deal for a while, when it came time to put everything onto a portable player, she just couldn’t do it. Then Windows changed formatting a few times, the Windows store changed, all sorts of BS happened, so she took all of her CDs and one by one uploaded them to iTunes. And when I moved away from my trusty XP box to buy myself a MacBook, I just copied my iTunes library to a drive and moved it over, which took about 20 minutes to do, with no problems. It was easy.

Now let me clarify this a bit. I loved PCs. I knew XP like the back of my hand, and if someone had a problem, I could generally fix it. I was the IT guy at all of the companies I worked at, not by title, but by knowledge because I was the guy who could fix things. As a result, I had no ill will for Apple and iTunes, because it worked on my PC, so why not invest in the product? Everyone I knew had an iPod or were getting one, plus iTunes itself was clean and modern and worked well. I had used Apples in high school, and I knew it was a good company, so I put my faith in them to continue on with the product line so that I wouldn’t have to eventually copy over all of my music again, just like my wife did. It worked. It was easy. It was simple.

That ease of use pushed me into the Apple world, and developed a trust between me and the company. I don’t have to worry about my MacBook Pro dying because if it does, I’m covered. I don’t worry about Applecare screwing me on my warranty the way Best Buy does on a regular basis because it’s Apple, and if I want to complain I can send a letter to Steve if need be – and it gets answered. Because of the trust, I’ve bought more computers in the past two years than I’ve ever bought, and they all function flawlessly.

No one really gets that – the trust that a consumer needs to have in a company. For example, I buy Samsung TVs because I like the quality and they’ve always been reliable for me. But I wouldn’t buy a Samsung phone, because everyone I know who has one talks about the issues they have, and the fit and finish sucks. And why? Because the phone division is in one part of the world and the TV part is in another, and they never talk. There’s never one guy pulling the strings and setting things in motion. Instead, they have a million products and a few shine out, instead of a small lineup of quality products.

I buy Apple products because I trust that it’s going to work out. I bought an AppleTV because it was a way for me to get my iTunes library to my television. Although it hasn’t been the best product out there, it does do as I expected and works pretty well. Is it perfect? Not in the slightest. But I know that there’s no proprietary format that I have to deal with to use it, and I don’t get frustrated when I turn it on.

Contrast that to my PSP. I loved the PSP when it first came out, and it was a constant in my bag on a long flight or a road trip. But to use it, I had to have a memory disk card, and then run UMD discs which were expensive. When I bought my new Canon camera, I used the same compact flash card that I bought for the camera I had prior, and it was 4 years old. I didn’t have to spend that money again, like I was throwing it down the toilet.

Palm, Google and BlackBerry all wonder how they can beat Apple with the iPhone, and make their devices better, so they end up producing high-end products with fancy options that they thing everyone wants. But because it’s not easy to use and integrate with their lives, it doesn’t click. When I bought my iPhone 3G I took it home, plugged it in and a few minutes later my music was on the phone. I couldn’t do that with my BlackBerry. I loved my BlackBerry but it meant carrying an iPod and my Curve with my wherever I went – or switch my music to another format to download to my phone. It’s not easy, so I didn’t do it.

Apple uses the tagline “It just works” a lot, but fact is, it’s true. I don’t get frustrated anymore. The last time I saw a blue screen of death was at Ikea (pictured above) and I laughed because I don’t have to worry about my physical memory dumping on me. Even the one time I had an issue with my company’s MacBook, Apple took care of me.

So why won’t they win? Because they don’t give a shit about me, they only want my wallet. Sure, Apple wants my money too, but they want to take me into their world, show my how nice everything is, and make it easy for me to pick up new things. Why?

Because then I’m going to buy even MORE.