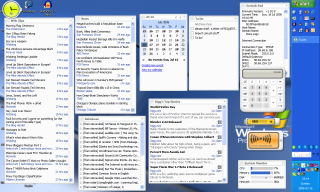 I was pretty excited about the recent news that Google has committed better support for us folks on the Mac. I’m a recent convert myself, much like some on Google’s Mac team (though not exactly a 100% switcher, since I usually work on my PowerBook and Windows-based laptop at the same time–I do a lot of stuff on both platforms, like working on the Mac and gaming on the PC).

I was hoping the announcement would include something to the effect of Google’s porting its plethora of client-based tools to OS X, but I guess it’s too early for that. Sure, the Google Software Downloads for Mac page is cool, but the first thing I noticed was that it’s mostly old stuff. Google Earth? Picasa? Toolbar? These have been on the Mac for some time now.

What I’d like to see is something new, and the first thing on my wishlist is Google Gadgets for the Mac. I know Mac users probably won’t have much need for Google Desktop Search (the bigger package that Gadgets is part of), with Spotlight and even other existing third-party apps like Quicksilver that do local search so well. But here’s why I want Gadgets and even Google Desktop on my Mac.

Okay, I just realized Mesa Dynamics’ Amnesty Generator can convert Google Gadgets for Websites into Dashboard Widgets. But this is limited only to the Gadgets available for the Web, which does not cover the entire Gadgets collection. Still, if that’s possible now, then I’m hoping a native Google solution isn’t too far away.