Want your iPod Nano to look like Raw Meat? No... 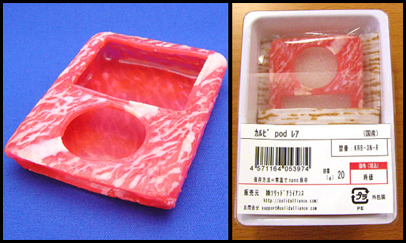 Now I know there are at least a few of you out there that have been dying to have your iPod Nano look like raw meat. I mean, who wouldn’t? Imagine the kitchen-based prankery that could ensue if you had an iPod Nano that looked like meat!

You cut put it into a steak cut and BOOM! Run a hilarious video while your family is trying to prepare dinner. It would be a gas!

Either way, if you want your iPod Nano to look meat-based…now you can have it. Thanks to a link from the Raw Feed we now have proof that there is absolutely nothing left that can be done with iPod cases. This one wins the award for odd.

This company is selling an iPod Nano case that not only looks like raw meat, but comes in a packaging that looks like you purchased it straight from your local grocer.

You can’t make this stuff up.

It does, however, remind me of one of my favorite online comics strips, Dinosaur Comics, which has a collection available that has a very similar cover.