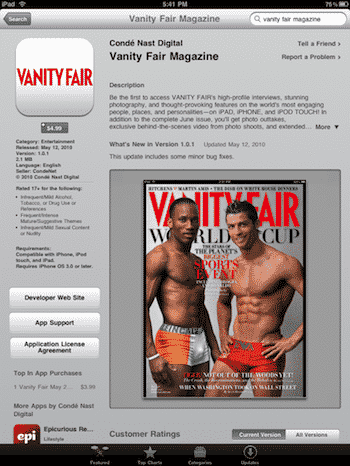 Big fan of Vanity Fair? Well if you are – and you know who you are, people – they’ve just released the app for the iPad and iPhone [iTunes Link]. Their plan is to release a new app each month for each issue, that way they get paid on each version. Here’s their official statement on the product:

Kelsey Grammer is sold separately, but for $4.99 you get the entire issue and all the extras, and each subsequent purchase of the magazine costs only $3.99. How does a print magazine translate to an iPad or iPhone, you ask? Well, you can read it two ways: the horizontal version lets you flip through an exact replica of the print magazine, and the vertical option has scrollable and resizable text with exclusive slide shows and video. As editor Graydon Carter put it, â€œIâ€™m especially pleasedâ€”and, as someone whose first magazine was set with hot type, a little amazedâ€”that the words and images translate so beautifully onto the screen. The iPad really brings the magazine to life in a whole new way.â€

Vanity Fair is one of many magazines that isn’t quite sure how they’re supposed to make money in the digital world. I’ve spent a good portion of my career in publishing, and $5 an issue seems to be a bit excessive. Hell, even $4 seems high considering the savings on printing costs. But we’re in the beginnings of the digital print age, similar to the days of the introduction of the printing press. At some point, people will figure out what works and what doesn’t. Here’s Vanity Fair’s attempt. Will it work?