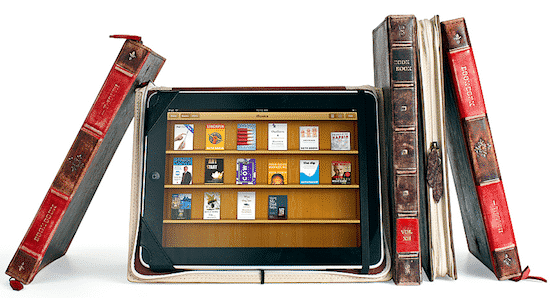 I’ve spoken pretty consistently about my love of TwelveSouth products. They’re well designed, thought out, and look great to boot. I have two of them here on my desk right now, and so far, so good. I’ve always been fascinated with their BookBook case for the MacBook, because not only does it provide a stealthy look for your computer, but also gives added protection as well. Now, the geniuses over there have decided to do the same thing for the iPad.

It’s called the BookBook for iPad – duh – and it’s a leather-bound book that’s padded on the inside. It stores your iPad safely from harm, all while looking like an old book that no one would ever possibly want. I mean, who reads old books, right? Just my mom, and she also watches General Hospital while folding laundry.

As if that wasn’t enough, the BookBook for iPad also doubles as a stand. It has a simple string system that allows you to fold the book back onto itself into a “V” shape, allowing it to stand on end or horizontally. Of course, being cutting edge is never cheap, and this one hits the pocketbook pretty hard: $69.99 gets you a case in red or black. I know I like it, I just don’t know if I can stomach the price.