Travel Kit Plus by incase 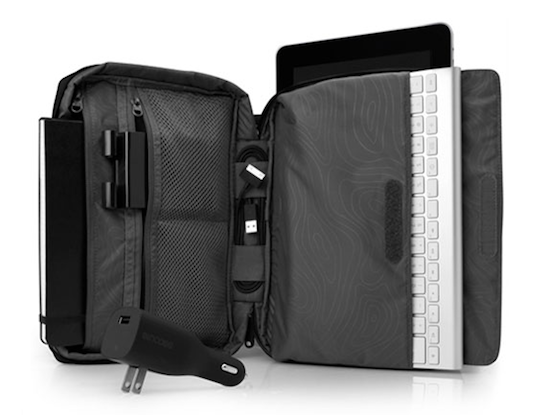 This is probably the coolest thing I’ve ever seen, and I know it sounds like hyperbole, but it’s pretty damned cool to me. So what is it? It’s an iPad case from the good people at incase, but yet it’s so much more.

It’s called the Travel Kit Plus, and it solves a few big problems with typical iPad cases. See, most of them have the whole “protecting the iPad” thing sorted out, but the issue is with travelling. Going on a road trip or hopping on a plane means you’ll want to include a power adapter, and maybe the keyboard, too. So how do you fit all that in a traditional case? Fact is, you don’t. Now there’s another option.

This case has a spot for the iPad, but it also has a storage compartment for the Apple Bluetooth wireless keyboard, a stand, USB drives, the iPad earbuds, and other goodies, too. Incase has released some new chargers now too, and they have their own spot in the bag.Â Let’s take a moment to talk about this stand, too. It’s included with the bag, and it holds the iPad, but also has a slot for cable management as well.

This is a lot of stuff in one bag, and it’s not too pricey, considering. It’s just $59.95, and it makes travelling with the iPad that much easier. I don’t have an iPad yet, but when I do, I’m buying this case.