The Secret Big Bang With the iPad Announcement 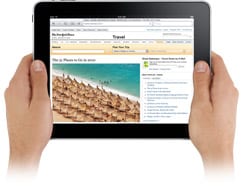 So yesterday I was sitting at my computer, doing my daily research, when I came across this article over at Daring Fireball. I mulled it over for a bit, then wandered into the baby room where my wife was doing some painting. I started spewing out my thoughts about the iPad and the hardware that went into it, and she said, “Didn’t Apple always make their own chips?”

Admittedly, I’m not an Apple historian. I’m an Apple guy since 2006 technically, so really, I only know little highlights here and there. I explained that IBM made the Power PC G5 processor (and G4 I believe), before Apple made the switch to Intel in ’05, which is when I jumped onboard. That though, got me thinking again, about that keynote speech where Jobs announced the partnership with Intel. It made me think back to why Apple made the switch and how they did it. That led me on a tangent, which I hope you’ll follow me on after the break.

I’m imagining a conversation between Jobs and his engineering staff that goes like this:

Jobs: “OK guys, let’s get on track with some hardware and make ourselves some processors.”

Engineers: “Umm … we don’t really do that. We can use some chips from IBM.”

Jobs: “Alright, so we’re going to rely on someone else to make our processor. Let’s use IBM for our OSX project – but let’s also take you guys over here, and you guys design and work OSX around Intel and AMD processors too, just in case things with IBM don’t work out.”

Engineers: “Isn’t that a waste of time?”

Jobs: “Who wears the black turtleneck?”

Jobs: “That’s right. But hey, let’s also get another team together and start making some chips of our own.”

I look at Jobs like this: The guy has long-term vision. When he announced the Intel transition, he said that he had a team working on making OSX Intel compatible for years, just in case. But with that kind of forethought, do you think he would have just bet the farm on Intel? I doubt it, that’s why I think he decided to branch out and adopt other options; Intel, AMD, and making their own stuff. Apple’s been profitable for a while now, so they can dump a few million into R&D facilities and not blink an eye. Why not hedge their bets?

So Intel works, right? We all love the Intel processor, and everyone wants an i5 or i7 Intel chip when they come out in MacBooks next year. Intel is good.

Do you really think that Jobs is happy with Intel? I mean sure, right now he may be, but this iPad put out there an interesting announcement that Gruber pointed out the other day in his post: Apple makes processors now.

Alright, so they make a processor for a tiny device that isn’t very complicated – or at least not as complicated as everyone would like. Doesn’t mean much, right?

Wrong. I guarantee that Apple will move to their own processor in the future. Why wouldn’t they? If they can make their own processor today for the iPad, it’s just a matter of time before they make a processor that at least matches what they have with Intel. And if they make it themselves, they save money, they keep it all in house, and with price points pretty much set as is, they can just pocket the profit. It’s goddamned brilliant.

Microsoft fanboys will say that I’m sucking Jobs’ teat and being a fanboy of my own. So to them, I pose this question: Name me one Windows manufacturer who makes every part from top to bottom in their products. It’s not Dell, or HP, and it’s certainly not Microsoft. Stumped? Yeah, me too, because I couldn’t think of one at all.

But with Apple, that’s all different now. Currently, as far as I know, my MacBook has a hard drive made by someone else and a processor made by someone else. Everything else that I know of, minus maybe the ram or some minor things in the process, is physically manufactured by Apple, in house. And when they can make it 100% Apple stuff, then look out Gatesboys, because then Apple is going to be even more of a force to be reckoned with.