The Samsung Galaxy will Dominate Tablets Next Year [Featured Snark] 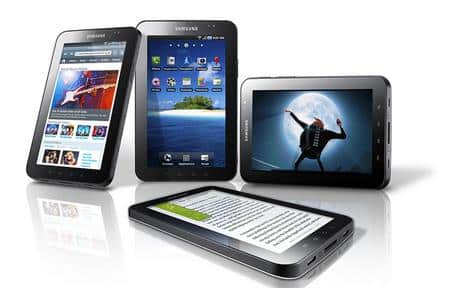 The smack talking has begun.

Mr. Yoon said Samsung expects to ship 10 million Galaxy Tabs and take a third of the global tablet market next year. Samsung is exploring the possibility of a tablet with a 10-inch or six-inch screen, and Mr. Yoon said the company plans eventually to introduce a family of Galaxy Tab devices.

No kidding. So in by this time next year, everyone I see is going to be carrying either an iPad or a Galaxy Tab, huh? Sounds like a load of crap to me.

Everyone says they have the next iPad killer, but I’ve discussed that before. The thing is, the iPad took off for a few different reasons, none of which are going to be motivating factors for the Galaxy Tab.

First, there’s the fanboy community. There are easily a million Apple fanboys out there who buy everything that Apple puts out blindly, no questions asked. Once they get the new device, they become a million-plus strong preachers for the cause, who go off and tell all their friends how cool the new product is. That brings in people, including the normal people who aren’t early adopters. I love Samsung TVs, but I wouldn’t buy one of their tablets. It’s unproven technology for them to me, so I’m just not interested.

Second, there’s Apple’s marketing campaign. Apple has their ads down pat, and that alone has helped sell iPads like crazy. Even if Samsung puts out a stunning campaign, I just don’t see people dropping iPads to pick up the Tab. Apple sold 3.27 iPads in their first quarter selling them, and have sold lots more since then – and that’s just domestically. By the time the Tab comes out, there will be easily 6 million iPads sold – if they’re not already. Is the tablet market really a 16-million unit mover? Will there really be 16 million tablets out there by then?

Third, there’s the hidden cost. The Tab is going to come out with a low price – between $200 and $300. But it’s also being sold through AT&T, T-Mobile, and Sprint/Nextel. That says to be that it’s a subsidized product, similar to the iPhone with AT&T. I don’t care how cheap the tablet is, if I have to sign up for another contract to get it, then I’m not in. Even if it’s month to month, it’s just not worth it to me.

So here’s my official verdict: The Samsung Galaxy Tab will sell quite a few units. But they won’t have a third of the global market by the third quarter 2010.