The Power of Voice Control 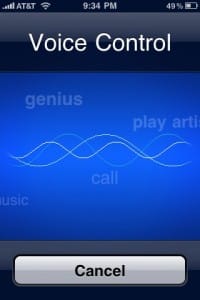 I was in line for an iPhone 3GS on release day, just as excited about my new purchase as I was about getting Darth Vader on Christmas, 1982. But of all the new features that intrigued me – faster speed, voice memos for interviews and even just getting a black model instead of my white 3G – the feature I really didn’t care about was the new voice control. I had the feature on my Blackberry and never used it then, and it wasn’t reliable in any previous phones I had, either. So why would I even use it?

Fact is, I didn’t. Not until recently, anyways. I was driving to Las Vegas on business and I needed to call the dog sitter to let them know when we’d be back in town. I was going 80 mph the legal speed limit down I-95 at the time, and I didn’t want to take my eyes off the road to find the phone number. I considered what I was going to do, and then I remembered that I had a 3GS and voice control, why not give it a shot?

“Call Tanya, iPhone,” I said, and that’s when I heard two tones and a distinctive voice. “Calling Tanya, iPhone.” Next thing I knew, I was talking to Tanya.

For the past few weeks I’ve been playing around with the app, testing its accuracy, and I haven’t had a problem. Sure, it mispronounces my friends names, but it still pulls up their correct info. and if I say “mobile” instead of “iPhone” or vice versa, it still makes the connection. It’s pretty amazing how well it works. So much so, that it’s my new favorite toy.

The iPhone is an amazing device for me because every time I think I’m getting tired of it, something new comes along – or I discover something new – that changes it all and makes the phone appear new to me. This time, it was voice control. Who knows what it’ll be next month.