The Long Strange trip of my iPad Camera Connection Kit 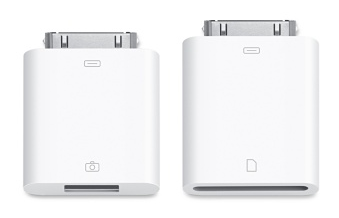 The day before the iPad Wi-Fi+3G was announced, I went to my local Apple store to talk to an employee about how the process was going to be handled. While I was there, she mentioned that I should buy my accessories now, because soon they would be out of stock and I’d want to get in on them now. I looked at the rows of cases, docks and iPad Camera Connection kits and said to her, “Nah. I’ll get them afterwards.” Turns out, that wasn’t such a great idea.

The next day, there were no accessories to be had. I searched for the following few weeks, but had no luck. I decided finally to pull the trigger and buy one online on June 2, and I’ve been waiting ever since.

The other day, I get a shipping notice. Is it the iPad Camera Connection Kit? Nope, my blue bumper is coming for my iPhone. Another shipping notice hits, and again, another bumper being shipped. It wasn’t until just yesterday, almost a month after I ordered it, that it finally shipped. I don’t have it yet obviously, and it seems like it will take another week for it to appear. That’s because as of Thursday it was departing Shenzhen, China, on its way to my house.

Ever wonder where exactly that is? I hadn’t until I got that e-mail, so I looked it up. as it turns out, it’s next to Hong Kong and near Taiwan on the Southeastern corner of China. From here, it’s going to Hong Kong, then up north to Alaska, where it will go through customs. Then it’s off to my house from there, with maybe a stop or two in the US along the way.

At the end of it all, it’s going to be at least 5 weeks before I see that iPad accessory that I bought online, and when I do, it will have seen more world travel than I have.

But what’s my point? If you want one of those buggers, you’d better order it now, and then be ready for a long wait. After all, someone in China has to build the thing first.