The iPhone, Unicorn Tablet and the Future of Magazines 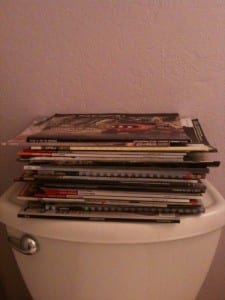 I got into writing as a profession because of a chance encounter with an editor and a whole lot of good luck. Since then, I’ve been writing for several different publications, ranging from automotive, to lifestyle, and everything in between. That picture above is my toilet, stacked with the latest issues – and a few favorites – of my monthly reading selection, and every day I spend some time flipping through them. I’m sure the men out there can empathize.

All the blogs talk about the magazine industry dying a slow, painful death, and how great it’s going to be because blogs will take over the world and news will become more about snarky comments than good content. I disagree about both of those thoughts.

First, magazines aren’t going anywhere. Yes, some magazines are being cleansed from the system, because there were a lot of crappy titles on the stands. The publishers of certain magazines also aren’t used to reporting to investors that sales are down, and the infrastructures in those books are so huge that it takes millions to run them. Here’s an example.

I worked for one magazine that had three full-time editors, who would travel the country every weekend for stories, and then put out a 150-page book. When the size went down, so did subscriber rates and ad sales. Eventually, it got to the point that the book couldn’t support the three editors, so they went to two. Then they folded the book.

Compare that with another company I write for. There are two editors who put together a 180-page magazine by themselves, doing the same amount of traveling. But then they picked up a new title, and now they’re doing both of them simultaneously. I write for another publication with 9 branches across the country. Each local edition has 1 editor and 4 sales people – no supporting staff or anything – and then there’s a central hub which does all of the design and copy editing. It’s a much more efficient design.

Which brings us back to the Tablet and the iPhone. I’ve caught myself playing an app or browsing the web while doing my daily duties, and I’m sure others have as well. This bathroom mentality is crucial to the Tablet, because like it or not, people will be sitting on the throne and wanting to flip through a magazine. It has to be clean and simple to use, plus convenient to hold with one hand. It’s a tough hurdle to cross.

On the other end, magazines have to push forward with digital editions and make them as cool as the print version. Interactive designs, cool layouts and every ability that you have with a traditional magazine needs to be reproduced online, and in the same speed. No more waiting 3 months to put the digital edition of your book online, it doesn’t make sense. Instead, use a push notification to let customers know that the new issue is out, and give subscribers an easy way to get the book.

I honestly feel that for magazines to survive, there needs to be a shift in thinking. Conde Nast is trying one, but I think that without a hardware manufacturer like Apple who has captured the excitement of the industry to make it all come together. If these companies can reshape the industry with Apple holding their hand, I think that they can really make a cool publication around the digital medium that will get people excited to buy magazines.