The Haters Versus the Lovers 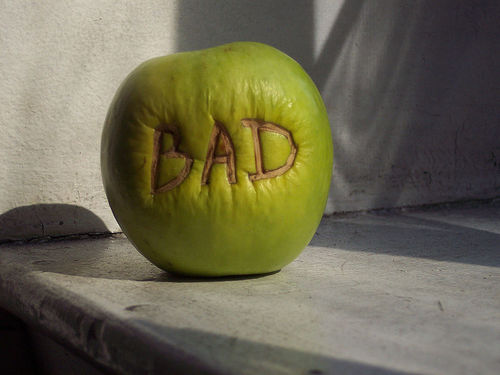 I do enjoy my Apple products. Right now I’m hammering away on my MacBook Pro with my iPhone at one side and my Airport Express providing two network connections to the house. But I don’t think I fall into the category of fanboy, no matter how many Apple products I own. Why? I don’t think Apple is infallible. The MacBook Air holds no interest to me because of its lack of power and optical drive. Frankly, I think you could swap the iPad and MacBook Air with each other and never notice the difference. I also think the latest iPod Shuffle is ridiculous. I can see removing the screen – I own an older Shuffle and it’s great for working out – but no buttons? That kinda kills it for anyone who wants to use any set of headphones other than the poor quality Apple headphones. That’s right, I don’t like the Apple headphones either. Apple is not perfect, nor is everything they produce.

But Apple isn’t 100% bad, either. There are a lot of Apple haters out there, including Gawker. Yesterday, there were multiple items talking about how bad Apple was as a whole. Here’s a sampling:

Now, I get that there are plenty of fanboys out there, but for every fanboy, it seems like there are four haters. In Gawker’s case, I get why they’re a little bit bitter. After all, they are being hunted by Apple right now for that whole Gizmodo thing, so I can see why they’d be a bit bitter. But really? 3 posts in a day about how crappy Apple is? Isn’t that a bit excessive?

Life is about balance, and for the most part, I hope I show that with my Apple coverage. Yes, I do showcase Apple in a positive light most of the time. But fact is, there’s no reason for me not to when I see their moves as positive. I’ll report on the bad as well, but I’m not going to focus all of my efforts into it. And when you’re Gawker, it makes you appear like you’re just petty and bitter. And a bit immature.