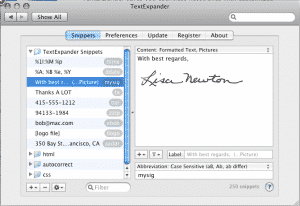 There are a few apps out there that many people consider to be standards for Macs. Quicksilver, Secrets and Growl come to mind, but up until recently, one of them that I was resisting was TextExpander, and mostly because it wasn’t free. But I was working on an article today, and realized that I had been writing the same sentence at least 40 times since October, and if I was able to shave some time off of the process, I could get more stuff done. The answer was TextExpander.

There was a 30-day trial available, so I figured I’d start with that. A quick install later and after I watched some of the tutorial videos on their Web site, I started to setup my list, and then I tested it out.

Almost immediately, I wondered how I had ever lived without this program. Repetitive sentences that I hated to type again and again now were a few keystrokes away from being done. At first, I was saving seconds at a time, and by the time an article was done, it turned into minutes. Multiply that by a day of work, and you’ve got a pretty sizable time saving.

There are other cool uses for TextExpander as well. If you frequently misspell certain words, you can turn the program into an auto-correct, fixing your mistakes every time you make them. That’s a particularly nice feature if you’re using a program without auto-correct, or if you find yourself making mistakes frequently.