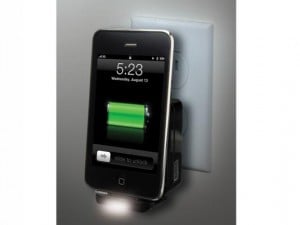 This is just one of those products. You look at it the first time and say, “Man, that’s stupid.” 5 minutes later you’re slapping yourself on the forehead saying, “Why didn’t I think of that?”

Well, you didn’t. Accept it and move on because the people at Scosche have released the reviveLITE II, a docking station and nightlight for the iPod and iPhone. First off, I never new there was a reviveLITE I, but maybe that’s because I live in a cave where light only peers in when my master opens the door to bring me cookies. Or, it could be because I didn’t get the first press release. Whichever is more likely, this is a cool little product, designed for travellers. Plug the base into your standard wall outlet, flip it open and you’ve got your light and your phone.How is the light handy?

I remember very specifically waking up one morning at 4:30 am, to get ready for a photoshoot at 5:30. I couldn’t find my phone anywhere in my hotel room, and it was dark, and I couldn’t find the light switch. Had I owned one of these, I could’ve found the phone in the dark pretty easily, then used the Flashlight app to find the light switch. See? It’s solving problems.

Better yet, it’s cheap. At $24.99, it’s pretty inexpensive for an iPhone accessory, considering most people want $50 for a charger because it’s white.