Sex and the App Store 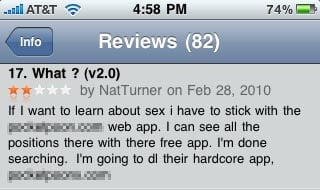 All this talk recently about the lack of nudity/skin in the App store got me thinking. After all the dust has settled, what apps are left in the App store that are racy? Is there anything that would disturb me as a parent? I decided to do some research and look around to see what I could find, and it didn’t take me long to stumble upon the problem.

I opened up the App Store on my iPhone and went to “Top 25 Free,” where holding the No. 2 spot was “Sex Positions Game.” A 2 star rating doesn’t scream “Top 25” to me, but maybe people figured it would have a boob in it or something. Then I started reading the reviews, including one of them which is posted above.

But what if you were a 10-year-old kid looking for a free game to download on your iPod Touch while you’re at a doctor’s office? Maybe you’re a little curious and decide to check out this web app on Safari, just to see what it’s like? If I’m that parent, I don’t want my kid to check out some hardcore girl-on-girl action at 10, no matter how accessible it is. And if they do find something like that through the iPod Touch or iPhone, well then I may just give up that platform entirely to stop the problem. Which means I also wouldn’t buy the iPad for the same reason.

The answer here is adding a filter. Whether it’s restricting the iPhone or iPod Touch in question with parental controls or putting limits on the iTunes account, something needs to be done to keep the bad stuff in the hands of those who want it, and to lock the others out. Yes, an Explicit category would help, but if it’s still available to everyone with no restrictions, then it doesn’t make any difference.

Now, you could make the argument that this type of software is just as prevalent on your desktop computer, and you’d be right. The difference is that it’s not as easy to find. If I want to find a program that shows me women in various states of undress, all I have to do is Google it. Then I can download the program or pay for it, then install it on the Mac. If I’ve got an iPhone, it’s often presented to me. I have to think about what I want if I want it on my computer, but the decision becomes clearer when it’s right there in the Top 25 on the App Store. It’s the difference between making a conscious decision to do something versus being shown it. I would never know that pears were green unless I saw one, and I wouldn’t know that hardcore porn existed until it was shown to me.