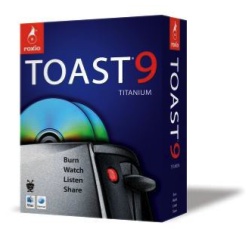 Roxio today unveiled the latest version of Toast for Mac OS X. Toast 9 features a variety of new enhancements and features including Blu-Ray support, video streaming for the web and iPhone, and much more.

Blu-Ray support comes to Toast 9 in the form of a $19.95 plugin that allows you to burn HD TV shows or AVCHD camcorder content, it also includes 15 new widescreen HD menu themes for spicing up your Blu-Ray Discs.

You can burn HD content to Blu-Ray or DVD discs for playback on the PS3 or Blu-Ray players.

It supports BD-R/RE and DL formats as well as the popular DVD formats.

Blu-Ray is not the coolest new feature of Toast 9, however, as it also introduces the Roxio Streamer – a new free service that allows you to Stream TV shows to your iPhone, iPod Touch, Mac or PC. If you have a TiVo it even has an automatic end-to-end recording and serving solution built right in.

In addition to streaming you also have some basic editing functions, allowing you to edit out unwanted sections of the video. Quicktime, DivX, TiVo, and Eye TV formats are supported.

There is also improved Audio Capture and Tagging, and Media Copy and Conversion (making it easier than ever to move your DVDs to your AppleTV or other device with Toast).

The UI has also been given a face lift, allowing for a much sleeker look.

You can check out more info at Roxio.com.