Rock Band on the iPhone 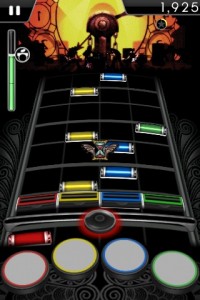 Quick story: I had just met this girl a few weeks prior, and things were just going alright. It was a bit awkward, and she was pretty shy, but I figured I’d put forth some effort and see where it went. Just not too much.

I go out on a date with another girl on a Sunday afternoon and it’s a train wreck. I bail early and call the first girl.

“Playing Mario Kart on the Gamecube.”

3 years later we were married, and next week she’s going to have my first child. Needless to say, I’m a console guy, so games on the iPhone just haven’t really done it for me.

Particularly, one like Rock Band. I like playing the drums on Rock Band because I can sit down, yet take out my physical aggressions for the sake of being a musician. What’s the point of playing the game with your thumbs?

Turns out, it’s surprisingly fun. Being a skeptic, I downloaded the free version from the App store and decided to try that out. It’s only got one song, but I played it in Easy, Medium and Hard, all while being incredibly entertained. I had a genuinely good time, and I think I’d even enjoy giving the full version a try.

Still a skeptic? I understand. Try out the free version and see what you think. If you decide to buy the free one, it’s $6.99 and you’re good. Give it a shot and maybe you’ll be pleasantly surprised.