by Jayvee Fernandez 13 years ago10 months ago
1 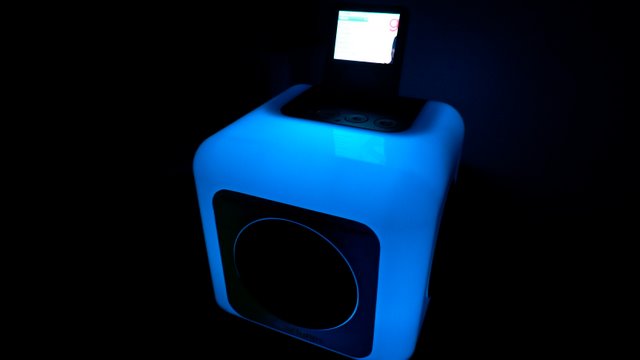 I’ve been a fan of iHome’s mid tier speaker systems for iPods ever since they came out. They’ve released a few eccentric classics such as the iPod touch speaker system that tilts alongside the iPod. But today we go back to basics and review a compact and affordable charmer, the iH15 Colortunes iPod dock which makes for a great Christmas gift for the holidays. Not only is it cheap, it performs decently and is fun to have as an eccentric furniture piece. With the lights off, it’s a great lamp. Also, at USD $60.00 you can’t go wrong. See what I mean — it’s out of stock!

Resembling a “weighted companion cube” the Colortunes speaker system emanates with a residual glow that changes color randomly or sticks to one color as preset by the user. It comes with two Reson8Â® speakers and one passive subwoofer that resonates from the cube’s underbelly. If there was anything you could improve with the iH15, it would be batteries. With such a light and attractive looking thing, it almost makes too much sense to be able to drag this thing to beach parties.