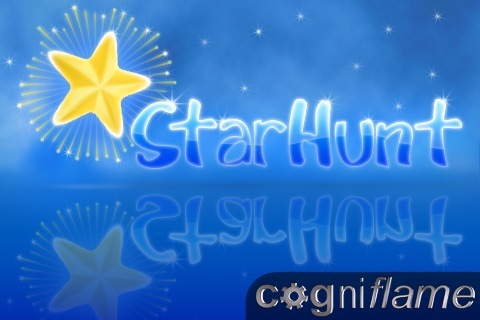 We get a lot of PR e-mails around the old office, a lot of them pitching games, products or services. That’s how I first heard about StarHunt, a game for the iPhone/iPod Touch, a game where you hunt through a building, looking for stars. Well, I figured I’d give it a shot, so they sent me over a free promo copy and I gave it a whirl.

Opening the game, the first thought I had was, “This looks like it’s going to play similar to Myst.” I used to love Myst, mostly because it was a giant puzzle where you wandered the world, looking for clues to help you solve more mysteries about the island. Similar to Lost, except Myst ended up telling you the secret of the island in the end. Anyways, I figured this would be pretty cool, so I went for it.

You start off outside of a house. You touch the screen and arrows appear, which show you which direction you’re allowed to go. Touch the arrow and move around the building, hunting for stars along the way. These are hidden of course, but not *really* hidden. Here’s an example: You walk through the front door of the house and turn left to see a bookcase. Nothing there, nothing fancy. Move forward one step and ta-da! Star, right in front of you. Now I would think that you could see it from 5 feet away, but then again, who am I?

The controls are very frustrating. Touch the screen on one side or another and sometimes it pulls up the arrows, sometimes it doesn’t. Then you touch the arrow and it doesn’t move. Try again, maybe it does. Swipe, it’s 50-50. Controls are so unreliable it gets frustrating fast. Then there’s the actual house itself, which once you get into it, is pretty boring. 200 stars on this property, and you have to literally walk up to every item to find the star, even if you’re just a step away. Which means that you’re literally searching every single nook and cranny in the house. Combine that with crappy controls, and you’ve got one of those “I’m going to huck my iPhone across the room” moments. The result is a game that’s less like Myst and more like a frustrating game of hide and seek.

All that said, if this app was free, I’d consider it for a download. But right now it’s $1.99, and frankly, it’s not worth the two bucks. It’s almost unplayable at times, and it gets so frustrating that I needed to walk away. I put in a good amount of time playing this thing, and I think that if it worked, I’d have thought that the game was alright although not necessarily a must-buy. Since it doesn’t, I don’t recommend it.