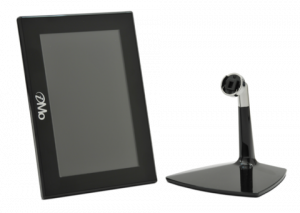 A few weeks back, I started researching alternative monitor solutions for my MacBook Pro. I have a 23-inch Dell monitor on my desk connected via the Mini DisplayPort adaptor, but if I wanted an additional monitor, I didn’t think I had any options. I discovered iMo, and after a few e-mails, they sent me one for free to review.

It’s named the iMo Pivot Touch, and it’s a touchscreen, USB powered, 7-inch monitor that can be positioned vertically or horizontally, depending on your preferences. IIn this case, the project vehicle is comes with a stand, a small kickstand for portable use, and USB cables for power. After installing the drivers, everything was good to go for a trial run. More after the jump.

First, let’s answer the obvious question: Why? Who would want a 7-inch monitor as a second screen? At first, I wasn’t sure either. But then I started using it, and now I find it’s pretty essential to the multi-screen system. I dump iChat, Pulsat and a minimized version of iTunes on that screen, so it’s always on and displaying information, but it’s not in the way of the real work I have to do. From what I hear, lots of people use it to store their toolboxes in Photoshop, keeping the workspace free of clutter. Other people use it for e-mail, although it’s pretty tiny for that, so I don’t see that being as functional.

In the pros column, it’s super portable. Unplug it and toss it in a laptop bag with no problems, making it good for travel. It also has a lot of adjustable mounting options, from the pivoting stand for your desk, to the kickstand for travel. The black bezel also fits nicely with the bezel on my Dell, and the USB cable tucks out of the way easily as well.

On the cons list, well, it’s a bit pricey. At $199, it’s more than my 23-inch Dell. The resolution isn’t adjustable either, with only 480X800 as an option, and no color variances either. The only thing you can adjust is the brightness and screen orientation. The installation isn’t exactly a snap either. It took some e-mails with tech to figure out why the touchscreen wasn’t working correctly, and I had to do a reinstall to get it working right. Even then the touchscreen was super sensitive, but I don’t really know how often I would use it anyways. Plus, you’ve got to ask yourself if a second or third monitor of this size is useful to your work environment. I find it very handy, but then again, I didn’t have to pay for it either.

Final tally? If you really need touchscreen super bad, go with the iMo Pivot Touch. It’s pricey, but you pay to play as they say. For those of you who would like a second or third monitor but don’t want the bigger price, the iMo Pivot is also available at $129.99, which lessens the impact a bit as well. Ultimately, this may be one of those items that you just have to use before you know how valuable it will be. For me, I think that despite its few flaws, this is a great addition to my workspace. For others, the price and lack of adjustability may be the deciding factor.