by J. Angelo Racoma 16 years ago8 months ago 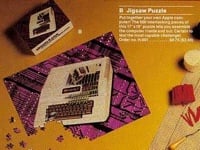 A guy [name removed upon request] chanced upon a rare find on eBay: an Apple ][ Jigsaw puzzle from Apple’s 1983 Gift Catalog.

Back in 1983, Apple released a gift catalog featuring Apple-branded merchandize such as mugs, T-shirts, and, amongst many other items, an Apple II jigsaw puzzle.

I bought it for 99 pence. Shortly after, it arrived – and, being so excited as I was, I put the jigsaw together.

Curious to find out more, I contacted the one man who knows the most about the Apple II: Steve Wozniak. He replied, in his e-mail saying:

“Wow. I know nothing of this jigsaw puzzle. It’s quite a surprise to me. I must have missed or forgotten it.”

I had an item so rare that not even the almighty Woz could tell me anything about it!

It’s one of those rare finds that would make a hardcore Apple geek all giddy with excitement. I’ve had a few rare finds myself, and I know the feeling!