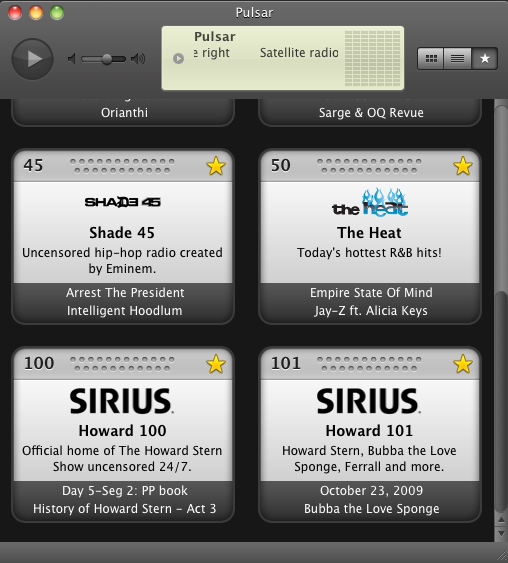 I’m a big fan of Sirius Satellite Radio, and I have been ever since Howard Stern made the move a few years back. Every day, around 9 am or so my time, I fire up Pulsar and listen to Stern. Up until recently, I just used Pulsar and lived with it. I liked the app, and it was definitely better than listening to Sirius via their web app, but I don’t know if it’s perfect.

If this sounds familiar, it’s because I reviewed Pulsar back in December. A highlight:

So is it worth the $15 price tag? If youâ€™re a Sirius/XM fan, then definitely. Since most of my time is spent either in the car or at the computer, this maximizes my monthly investment in Sirius, plus gives me added entertainment. It also saves me the hassle and exasperation of logging onto the web interface and hoping it works.

Recently, Rogue Amoeba, the people who make Pulsar, put out a major update, and the changes are spectacular. Yes, the display is better, and yes, there are new graphical displays for the favorites and the app itself. The most important thing though, is the ability to now timeshift satellite radio.

That’s right, just like your Tivo in the living room, you can pause your radio listening and pick it back up a little while later. This is amazing in action, particularly for me. What I used to do was listen to Howard, and when I’d have to get up for one reason or another, I’d just miss the show. Since the program was on all day, I’d just listen to repeats which is good and bad all at the same time. Sometimes it got annoying.

Now, I listen to the show and then pause it when I have to get up. This pause lasts for up to two hours or so in my testing, which is great. Once it’s paused, I can pick back up where I left off and fast forward through any commercials that may be there. It’s amazing.

Yes, there are other new features as well such as Growl support, but for me, the big deal is all about timeshifting. I love it.

If you’re a Sirius subscriber and you didn’t have Pulsar before, this has now moved up to a “must buy” status. Go do it. Now.