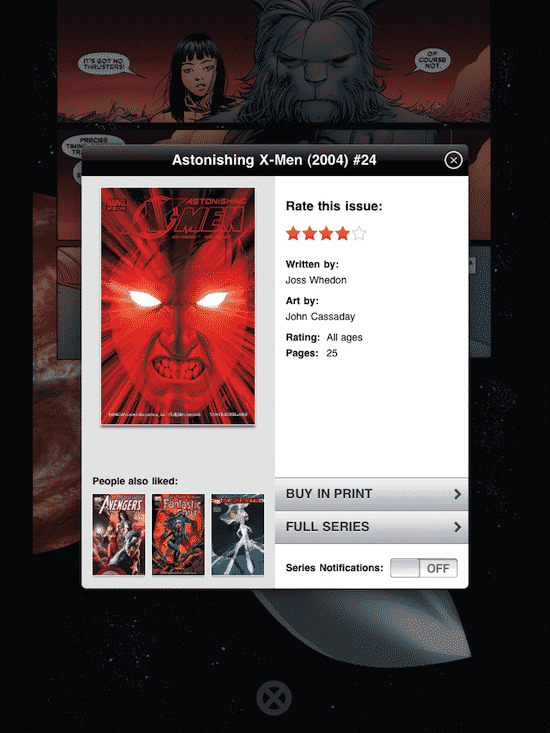 My life’s hobbies have come in phases. I started with Legos, and obsessed over them for years. Then I sold all of my Legos in a mammoth garage sale, and started my comic collection. For the next few years – until I moved on to the next hobby, cars – I lived in the world of the X-Men, Spider-Man and Batman. It was awesome. I did eventually sell my comics to fund a set of wheels for my first car, but I kept a shoebox full of my favorites. Every so often I check out the box and spend an hour or two flipping through the classics. It’s a lot of fun.

Once the iPad came out, I knew that it would become a perfect platform for comics. Marvel stepped up and introduced their Marvel Comics app [iTunes link], which is available for both the iPhone and iPad, but truly shines on the latter. It starts off with the drug dealer premise: They give you a few free to start, then they reel you in with purchases. After downloading 5 comics including a few I’d never normally read, I got into X-Men again. Turns out that Joss Whedon wrote 2 years worth of books back in 2004, I bought them all. At $1.99 each, it doesn’t seem very pricey, but it adds up. Do I regret it? Not in the slightest. In fact, it’s the most fun that I’ve had in a long time.

Apps like this truly show off the capabilities of the iPad. Sure, you could read these on your iPhone, and I’m sure it would be a lot of fun. But the iPad’s large real estate is perfect for comics, and when combined with the brilliant colors, it really takes you back. Frankly, I’m just hoping that DC doesn’t come out with something similar, because I would surely lose my life’s savings.