Popular Mechanics Goes to the iPad 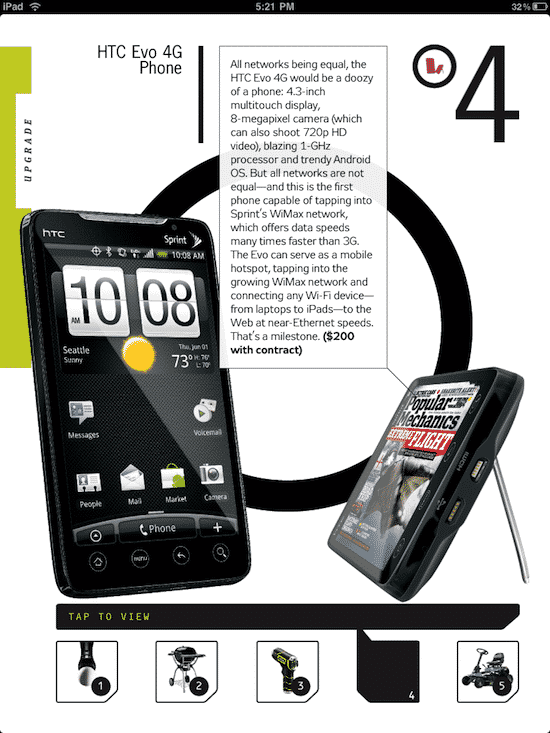 The world of magazines is in a tizzy, with no one really sure how to fix the problems they have. Wired hit the iPad App store a while back, but it didn’t quite hit the mark for me, particularly in the price. $4.99 was a bit steep for that first one, but since then, they’ve released a new version with every magazine in one app, each one downloadable for $3.99. Still, a bit pricey for me, considering.

Now we’ve got the Popular Mechanics iPad app [iTunes Link], and it picks up where Wired left off. It’s interactive, seamless, and flows very nicely. Take the screenshot above, for example. Each one of those icons on the bottom of the screen pop up to the image above. It’s interactive and cool to looks at, making it pretty fun overall.

There are a few problems, however. It doesn’t always seem to recognize when you’re swiping up and down for transitions or side to side for the next page. Partially, that’s a design issue. Since not every page goes down, you can’t swipe up or down for all of them, which is confusing. I did notice that they made yellow arrows to indicate direction, but that’s not always as easy as you’d like it to be. Second, the interactivity of it all has a few problems, and I did get a crash or two out of it.

These type of apps are all essentially betas, released to the world to find out what sticks and what doesn’t. In the case of the Pop Mech app, I think that most of it works pretty well. In fact, I’d buy this one month after month with no qualms about it at all, and I’m not even a subscriber. Ultimately, isn’t that the point?