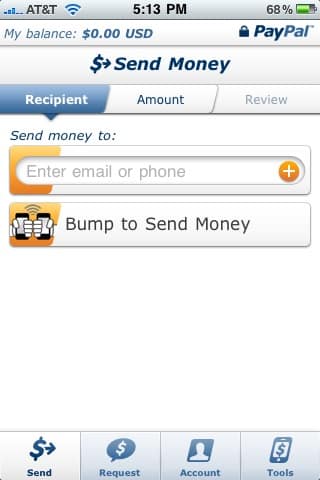 One of the biggest problems with the first version of the PayPal iPhone app was its lack of features. You could check your balance, send money via e-mail, and that was about it. This was incredibly frustrating for a few different reasons, but the biggest was the lack of withdrawing money. Often times I’ll be out and about and get a quick e-mail about money coming in via PayPal. Before the update, I wouldn’t be able to transfer my funds without going onto Mobile Safari and handling it the old fashioned way. To me, it was a waste of an app.

This new one though changes things a lot. First, all the old features are there, so don’t worry about losing what little functionality you already had. But now you can bump phones with another friend to send them money, request money from customers and there are even some cool money tools. For example, there’s “Split Check,” which allows you to plug in the amount of a bill, how many people are there and the amount of the tip, that way everyone puts in the correct amount. Better yet, if one of you wants to put in a certain amount, you can drag around these sliders to change the totals, and it will automatically calculate out the difference for the remaining people. Then there’s “Collect Money” and “Reminders,” with more useful ways to use your account.

For a free app, this latest version really gets it done. Now that it’s fully functional, I expect to be using this app a lot more in the near future.