OMG! Steve Ballmer is standing NEAR a Macbook Pro! 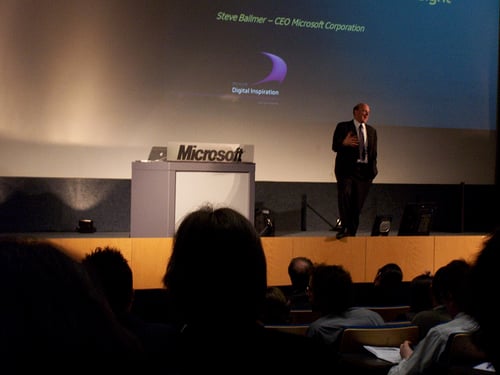 At the Microsoft Keynote in Louvain Steve Ballmer stood on stage…near a Macbook Pro. A revolutionary announcement, I know. I want everyone to stay calm. The universe isn’t going to implode, and – I promise – everything will be OK.

You ever wonder how some stories get to the front page of sites like Digg? I do. This is one of those stories. Apparently there was a Macbook Pro on the stage at the same time Steve Ballmer was on the stage giving his keynote. The Macbook Pro was left by a previous presenter earlier in the day.

Let’s say for a second, though, that it wasn’t left by someone else. Let’s say that is truly was Steve Ballmer’s Macbook Pro – would that be so bad? Or so shocking? I mean, sure, it was would be a surprise, but you have to remember – according to PC World a Macbook Pro is the fastest Windows Vista machine out there.

So even if we did see Ballmer with a Macbook Pro – I seriously doubt we’ll ever see him running OSX. Publicly, anyway.