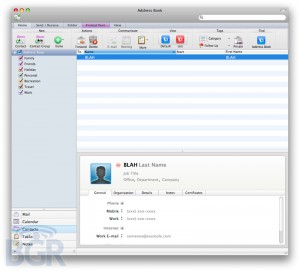 I don’t know how he does it, but somehow, Boy Genius Report gets all the cool scoops. Take this screenshot above, for example. That’s Outlook from Microsoft Office 2011, which is due to replace Entourage in the latest Mac Office offering from Microsoft. It looks like it has a lot of the same features, but I hear there are a few perks as well. I’m hoping to get my hands on a preview version of Office sometime in the next few months, so cross your fingers.

That said, Office has an uphill battle with many Mac users, myself included. I bought Office ’04 when I first got into OSX, because it was a friendly reminder of all things Windows. I used ’08 for a while at my work, and it crashed all the time. To say it was unreliable would be a compliment. Now we’ve got Office 2011. It’s sure to run around $399 for the full version, if not more, and it’s competing against the free OpenOffice and iWork for $79. When you figure that iWork doesn’t have half the problems of Office and works perfectly on OSX, well, it’s a tough call to make.

So what’s to change this from a repeat of last time? Well all of these apps have been rewritten in Cocoa, making it perform much better in Snow Leopard, plus hopefully Microsoft has figured out by now that the Apple platform is viable and maybe they should put some focus into it. From what I’ve seen, they’re really trying to hit this one out of the park. Here’s to hoping they do.