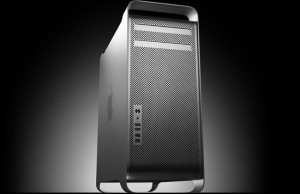 Apple wasn’t hesitant about killing off the Xserve without introducing a brand new Mac. Instead eager server buyers were directed to the Mac Pro and Mac Mini which were are both too extreme for a server environment. A rumor indicates that the next generation Mac Pro will fill the void left by the Xserve and feature an all new case.

A rumor posted on 9 to 5 Mac hints a new Xserve like Mac Pro is in the works. Currently being tested as a prototype the case is a little over 5 inches wide and 19 inches long. The front of the case would feature new sleds that packing 2 stacked hard drives making it much easier to swap out drives when mounted in a rack. The sleds will also fit much faster SSDs and the new Mac Pro is more than likely to support Thunderbolt.

The Xserve was discontinued at the end of January early this year. Those interested in adding a Mac to their server environment have the option of a Mac Pro and while its a capable machine, the case is large and does not conform a standard server rack while the Mac Mini is underpowered and lacks much of the amenities that were standard on the Xserve.