by Jayvee 11 years ago9 months ago 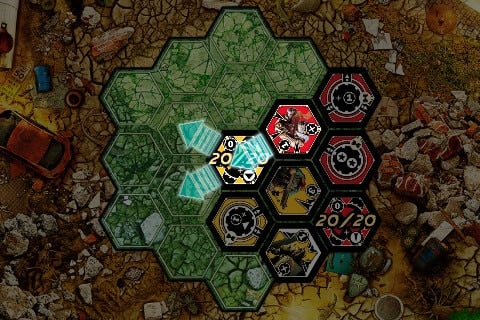 While searching for the best board game translations into iOS, I chanced upon Neuroshima Hex, a tile-based tactical game for 2-4 players. Based on its original Neuroshima franchise (a Polish RPG set in a post-apocalyptic world), Neuroshima Hex is the “Final Fantasy Tactics” of its RPG counterpart.

The iOS conversion is essentially the same game, albeit much easier to set up. Players choose from one of four faction called the Borgo, Hegemony, Moloch, and Outpost. In a nutshell, Neuroshima Hex takes place in a post-apocalyptic world where sentient machines are out to destroy the last bastion of humanity. The cyborg leader, Moloch together with the cyber-mutant Borgo are out to destroy the Outpost, a faction composed of humans who have assimilated Moloch’s technologies to survive. Between the power struggle, is the Hegemony an organized gang that wages war to expand their territory. In the latest expansion released just this month, Neuroshima Hex adds two new factions, Neojungle and New York.

Despite the loose alliances of the factions, the gameplay distinguishes each side as all being enemies despite the lore.

The objective of Neuroshima Hex is to destroy the opponents base, becoming the last one standing on the board. If all 34 tiles are used up, surviving players are ranked and points are allocated to them. These points are added to the global leaderboard via Gamecenter, which makes survival even more rewarding on the iOS version. Even if you didn’t win, you can still rank online. No points are awarded if you are destroyed before the game ends.

Gameplay
A game of Neuroshima Hex is easy to pick up. After a few rounds, you will be able to build strategies based on the faction that you play. To destroy your opponent’s base, you will have to deploy units that can do damage depending on the arrow direction of their attack. Some units can attack on all 6 directions of the hex while some may only attack in one or two directions. Units can do melee or ranged damage and proper positioning of the units adds to the strategy of blocking them away from further damage from the enemy. The game employs initiative-based actions. Units with higher numbers get to attack first with the each faction’s base attacking in the last phase, which is Initiative 0. There are special units allow players to disable other tiles and every faction has access to a set of “modules” that augment certain powers and movement.

Neuroshima Hex can be highly addicting and the gameplay will always vary depending on the number of players involved which brings to light varying strategies that will allow for flexible gameplay. Despite the game being released in 2010. Since then the game has been updated to support the ipad as a Universal app (yay!) and in-app purchasing.