2012 Zombies vs Aliens: Marching them to the death… again.

by Jayvee Fernandez 12 years ago3 months ago

This is a definite must-have for your iPhone if you’re into simple but immersive gaming. 2012 Zombies vs Aliens may seem like a campy take on post-apocalyptic warfare. However, underneath a complex “How to Play” tutorial is a fun and easy to learn strategy game that can lead you to gaming bliss till your iPhone battery dies. 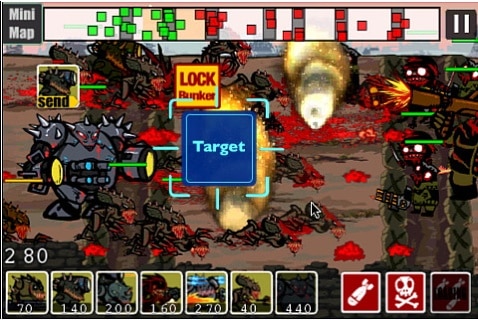 Whether you play as the zombies or the aliens, the goals are similar: you need to march your troops to the opposite end of the playing field and destroy the opposing team’s general. Combat is in real time and you have absolutely no control over your troops save the ability to “lock” them into a foxhole or send them off marching forward. Once your troops encounter resistance, they start stop their advance and fire till one or the other dies.

So essentially the game is all about amassing troops into foxholes and marching them off in a big swarm to overwhelm the enemy. You can purchase upgrades for your troops, more powerful units, and area of effect bombardments that can clear a foxhole filled with enemies. Since you’re only allowed 3 troops per hole, the strategy is to get the timing right to amass a big enough army and march them off at varying times so that they all make it to the front line together.