Moo an IMPULSIVE REVIEW of â€œCows in Spaceâ€ App 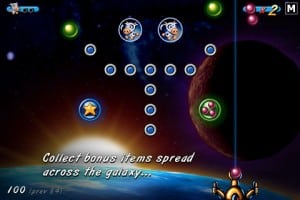 â€œIn a failed galactic operation, the cows of earth have ended up floating around in space!â€ The â€œCows in Spaceâ€ App is free for a limited time!

Somehow the U.S. government has accidentally fired and lost all of the earthâ€™s cows; the source of tasty burgers and filet mignon steaks are all encapsulated in oxygen bubbles keeping them temporarily alive in the harsh anti-climate of space.

This mooing application for the iPhone is a hit, because of the humor surrounding the shocking premise, and the fact that the game is incredibly fun, engaging and difficult.

The concept is simple enough: bounce teleportation bubbles into the cows, or hit the flailing hunks of beef into the teleport devices to transport the animals safely to earthâ€™s viable meat market. Each space gun has a limited number of shots, however, meaning that players have to strategically choose which way to try and ricochet cows and bubbles alike.

The graphics, sound and playability are all up to par in the â€œCows in Spaceâ€ game, which is created by Donut Games, the company famous for its â€œGarbage Pail Kidsâ€ Apps for Apple.

The App gives a hilariously pertinent piece of advice as well: â€œTip: Cows are fragileâ€¦â€ Who would have known that cows floating around in the vacuum of space, in transparent bubbles, would be at risk? Puzzles emerge as the lost cows crowd the phoneâ€™s screen mooing to be saved by a white knight in a butcherâ€™s coat!