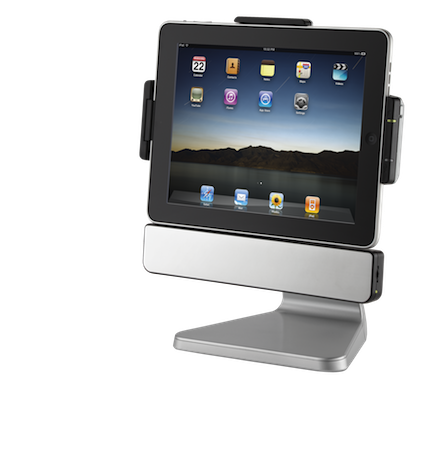 The world of iPad docks seems to be populated with dozens of iMac clones, but this model takes it a step further. It’s called the PadDock 10, and it’s a rotating dock that has speakers mounted in the bottom, hidden behind a silver iMac-esque face. Plus there’s a USB connection in the rear. So what’s so great about this thing?

Well the big pitch here is about the sound. The two speakers mounted in the bottom row apparently put out a good amount of bass, which is focused out of a port in the middle. That in itself is pretty cool, but it’s also not the real killer. Those side brackets on the dock aren’t just holders, they also include a 30-pin connector that plugs into your iPad. Just run a USB cable out the back of the iPad to your charger and you’re good to go.

The mount tilts and swivels as you’d expect, and the price isn’t too bad considering what’s all included: $99. Seems like we’ll always have another iPad iMac stand to review, but these one seems neat.