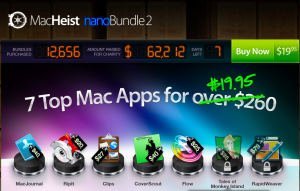 The great thing about owning a Mac is the amount of indie developers out there putting out quality apps. MacHeist has been capitalizing on that concept for the past few years, offering a bundle of big apps for one low price. The catch here is the teaser, where there are at least one or two apps that won’t be released until they reach a certain number in sales. Regardless, this is still a great deal at any price, even if you only want two of the apps. Their latest offer is the MacHeist Nano Bundle 2, with from 5-7 apps for $19.95. Here’s the breakdown and their standard purchase price:

Once 50,000 bundles are sold, Tales of Monkey Island will be released, which sells for $35, then after that comes RapidWeaver, which is $79.

I’ve talked about RipIt before, which is worth the regular purchase price as-is. For me, MacJournal and CoverScout are two apps that I’d like, but only at this cheaper price. They’re those programs that you want, just not that badly. For me though, the big app here is Tales of Monkey Island. I never played the old Monkey Island games back in the ’90s, but I’ve heard nothing but good things about it. That alone makes it all worth it to me. The good thing is that MacHeist usually has enough in sales to release these programs, so don’t fret too much about getting Monkey Island or Rapid Weaver. Chances are pretty good that you’ll be OK.