LogMeIn Ignition for the iPhone – Remote Control Your Computer

by Kevin Whipps 13 years ago3 months ago
2 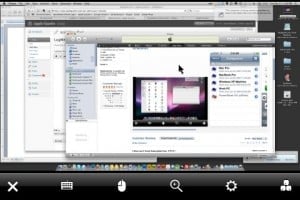 A few years back I had this huge deadline that I had to get done before a big trip, and I completed it just in time. As I get to my destination the next day, I get a phone call from my editor. “You got that one pic? I need that. Now.” Of course I didn’t. “That one pic” was sitting happily on my iMac’s desktop at home, so I had to scramble to figure something out. Every since then I’ve been carrying a USB drive with me, just in case.

Last month, one of my IT buddies introduced me to LogMeIn, a website that lets you access your computer from anywhere, and better yet, it’s free. There is a pay option that gives you even more options, but right now I don’t see a need for that personally, so I passed on the option.

Then I found out about LogMeIn Ignition for the iPhone. It turns your iPhone into a computer monitor and allows you to access your internet-connected computers from the iPhone. I contacted the company, got sent a free review copy of the iPhone product, and decided to try it out.

The setup is pretty easy. First, you have to sign up for an account on the LogMeIn website, then install a program on whatever computers you want to control. Then you open up LogMeIn Ignition on your iPhone, log in to your account, log in to your computer, and finally, fire it up. Total process took me about 10-15 minutes on all devices.

Working the program is about the same as any iPhone product. Pinch to zoom, two-finger scroll, etc. You can tap the screen once for a left-mouse click, tap with two fingers for a right-click, and so on. There’s even a keyboard that pops up when need be, so you can enter whatever you need into any program available. One of my favorite features is shaking the iPhone to switch monitors on your home setup if you’ve got multiple monitors. I have a second screen hooked up to my MacBook pro, and I was able to bounce between the two screens with no problems.

When on a wi-fi connection, the connection fired right up and I could watch the mouse on my MacBook Pro’s screen move as I worked my finger around the screen. At first, I wasn’t too thrilled with how the mouse worked on the iPhone, as it kept the point centered on the screen and moved the screen around the mouse, but after tweaking the settings, I switched it to a more traditional setup and got it the way I wanted it. I was able to open iTunes, surf the web, and do anything else I could normally do on my computer, albeit a bit slower. After all, it’s not as easy to move around a full-size computer on a small pad without a dedicated mouse or keyboard, but it would certainly help me out in a bind.

When I switched to a 3G signal, it worked, but it was very slow, and I was sporting 5 bars at the time. This isn’t particularly shocking considering AT&T’s data speeds, but the fact is that it does work, which once again, is the whole point here. If you need something off your home computer now and have no other way to get to it, LogMeIn Ignition will get you there, but don’t expect it to be just like your laptop shrunk in size.

LogMeIn’s web services are free, although there are upgraded options available. LogMeIn Ignition is usually $29, but until end-of-day Wednesday, its just $19. It may seem a bit pricey for an iPhone App, but if I had had this a few years ago, I would’ve paid twice as much just for the convenience. And just think about how convenient it would be to an IT professional.