LogMeIn Ignition for the iPad 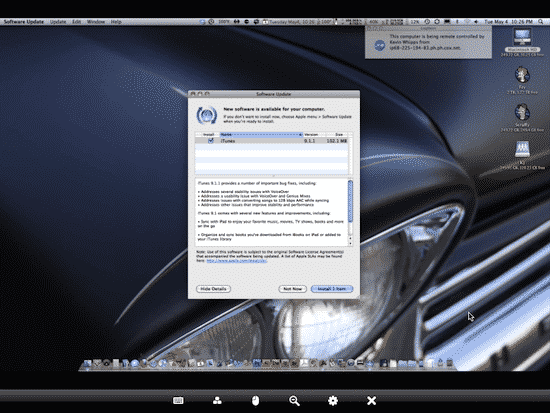 Back in December, I reviewed LogMeIn Ignition for the iPhone. For the uninitiated, LogMeIn is a service that allows you to sign onto your computer remotely to access the desktop. They had just released the Mac client, and the iPhone version was a great way to get to your files over a 3G connection. Ultimately, the only problem was the size. It’s a touch difficult navigating around on the tiny screen, but it’s better than nothing, right?

Well now they’ve released an iPad version of the app and here’s the good news: If you already have the iPhone version, just install the App onto your iPad via iTunes, and check for an update. That’s what I did, and 10 minutes later I was surfing my computer using the iPad.

The extended real estate of the iPad makes using your desktop remotely substantially easier than on the iPhone. Your finger becomes the mouse, with one tap becoming a left click, and all of the typical multi-touch features still working the same way. As is to be expected with a program like this, the connection isn’t as fast as it would be if you were in front of your computer. But it’s not like you’re going to hammer out a presentation on your desktop via your iPad. For me, I see this as being a great program for those “Oh Crap” moments when you’ve forgotten a file at home and need it immediately, or if you just want to show a buddy something you have at your other computer.

The iPad’s big screen makes programs like this shine. Yes, LogMeIn works on the iPhone, and it works pretty well. But adding those extra inches of room on the screen with the iPad makes it much, much better.