by RJ Huneke 13 years ago3 months ago 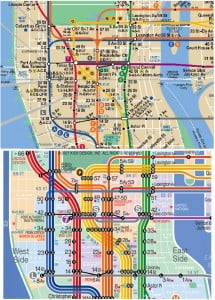 Letâ€™s hypothetically say that the subway is a dank underground dungeon housing miles of impregnable track that one must follow amidst confusing labyrinths, which lie beneath the concrete castles of New York City, in order to get anywhere.

Well thatâ€™s New York, and its useful, necessary and intricate underground train system, the subway, is a mystery to tourists, and at times, a hazard to locals that have to travel the cityâ€™s evolved horse and buggy system, and attempt to catch the right train at the right time.

Welcome the NYC â€œKickMapâ€ application, which has now become a necessary component in subway travel throughout the boroughs in and surrounding the greater Manhattan area. The NYC â€œKickMapâ€ Lite App for the iPhone is free, and displays an entire zoomable subway map, that does not require internet, as in the dungeons even the fastest 3G internet connection can lapse.

The reputable â€œKickMapâ€ App has been featured by The New York Times, and in this application every single subway line, stop and connecting train is shown. The innovative design screams touch-screen glory, as you can scroll, zoom, pinch, and peruse this program as if it were Google Maps on the iPhone: it is easy, detailed, and clear.

For a couple of dollars there is also the â€œ24 Hour KickMapâ€ version of the App, which shows the night service cutbacks of the trains in an additional NIGHT map, and it also has a built-in compass within the map itself to orient you to exactly which side of the train tracks you should be on!