Justin Long a Mac no more…

by Michael 16 years ago8 months ago
3 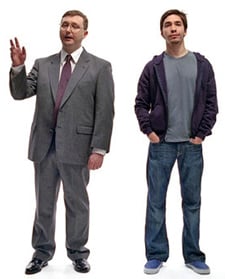 Radar Online reports that Justin Long (the “Mac” from the “Get a Mac” ads) will not be appearing in the next round of “Get a Mac” ads.Â  Was he fired or did he quit?Â  Well…that’s unclear, but his rep had this to say: “Justin’s a movie star, not a commercial guy.”

Long most recently appeared in the summer comedy “Accepted”, and is currently set to appear in “Live Free or Die Hard” along side Bruce Willis.

John Hodgman (the PC from the “Get a Mac” ads) is set to appear in a new series soon.Â  Will there be a new “Mac”?Â  Well…one would think so, but I’m not sure how they’re going to go about introducing a new Mac character.Â  If it’s one thing we can be sure of, it’s that Apple’s advertising folks will come up with something interesting for us, and I, for one, can’t wait to see where they go with it.