by Kevin Whipps 12 years ago5 months ago
5 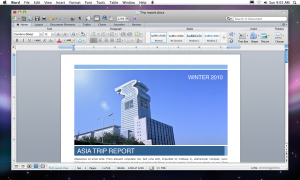 One of the first things I did when I bought my first mac in 2006 was to get Microsoft Office 2004. It was my futile way of clinging onto my Windows XP past, while stepping into the future. I eventually purchased Office 2008, and sure, it’s pretty, but it’s got more problems. Fact is, if Word wasn’t the defacto standard for word processing docs, I’m not sure I’d use it.

But there may be hope on the horizon. At Macworld back a few days ago, Microsoft announced Microsoft Office 2011 for the Mac, and says it will be out later this year for the holiday season. Then they even updated the Mactopia blog to talk about it. The first article discusses the new UI:

The most notable introduction to our new Office 2011 user interface is strikingly new, but readily familiar to Mac and PC users alike. Itâ€™s called the â€œOffice for Mac ribbonâ€, or as we refer to it internally, â€œMacRibbonâ€. The â€œMacâ€ part tells you that it was designed specifically for the Mac, with all of the recognizable attributes that Mac users have come to love; the â€œRibbonâ€ part signifies the shared lineage with the ribbon seen in Office 2007 and now Office 2010 for Windows. Given that this new user interface element is appropriately referred to as the Office for Mac ribbon, it represents a new user experience that has not yet dawned on any Mac or PC, and is making its first appearance today as a fusion of the best of both worlds.

There’s also an official press release about the product on Microsoft’s press site. They included this little nugget which I had forgotten about:

Along with the updated user interface and quick access to the Office Web Apps, the MacBU announced last August that Outlook for Mac is coming to Office 2011, replacing Entourage. Outlook for Mac is a new application that leverages the Exchange Web Services protocol and is being built using Cocoa, allowing for improved integration with the Mac OS.

That’s right, no more Entourage. Frankly, as crashy and buggy as Entourage was, I kind of liked it. It worked well enough for me at my old company.

The big hurdle that Microsoft has to get over now is the iWork suite. I’m a full-time writer, and recently I decided to switch over to Pages, just to see what it was like. Sure enough, I like it. And since I can save things in .doc format, I can send them off to my editors with no problem. Every time I use Word, I end up having one crashing issue or another, which drives me insane. If 2011 fixes those problems, then I’ll buy it. Here’s to hoping it does.