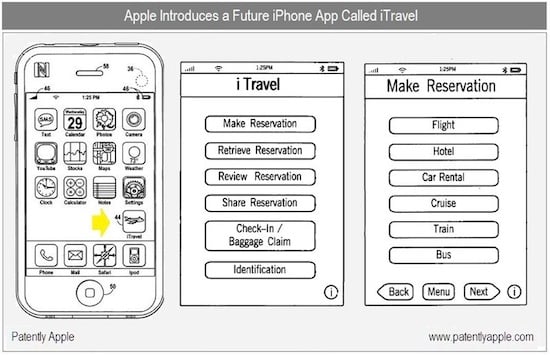 Sometimes I really feel like I’m living in The Future.

When I was a kid, I read a lot of X-Men comics, so my vision of The Future consisted of Sentinels and some kid with a crazy eye. We don’t have flying cars yet, and I don’t have the choice for a designer baby, but it looks like I may soon be able to make travel arrangements on my iPhone, and that’s pretty frakkin’ sweet.

This one comes from Patently Apple, the site dedicated to finding all the funky Apple patents that are in the works. They dug up this gem, which focuses on the travel industry, and the concept of ticketless systems. I’ll let them explain it:

Apple’s iTravel focuses on such matters as airline check-in and baggage identification, advanced electronic ID, car rentals, hotel and airline reservations and so forth. Apple’s iTravel is yet another Near Field Communications based application within a host of recent revelations.

This patent though, requires the use of an iPhone with the Near Field Communications interface, which the iPhone does not yet have. Although there have been pics of the next iPhone disassembled online, there wasn’t an NFC chip present – at least, not one that was found.

If this all went through as planned, this would allow you to board the airplane with the ticket on your phone, check in luggage, pay for upgrades, and even show your ID. It’s an all-in-one way to get going when you’re on the road.

Apple does put out a lot of patents, and many of them don’t come true. For now, the future of iTravel is up in the air. But if it does come to fruition, that would be pretty sweet. It’d be like living in The Future.