iPods and the Car 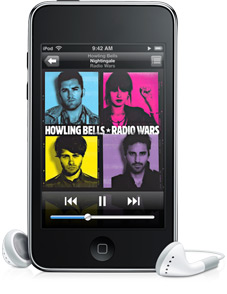 Way back in November, I did a post about iPods and Your Car, where I discussed some of the options out there for iPod integration into your car or truck. At that point, I figured I had seen the end of iPod integration into the vehicle. Then today, I saw something on TV which made me think about it a little bit differently.

Chop Cut Rebuild is a show on the Speed Network, where they take a few different cars and build them from projects into full show vehicles over the course of a season. Today I watched one of the final episodes on their ’40 Mercury build, where they finished up the build and installed the stereo. I can’t find the full episode online, but if you check out this clip (particularly at the 0:58 mark) you’ll see the stereo they installed.

Most cars use a head unit; something that has a CD player, FM stereo, navigation, or even a DVD player. In this car, there was an iPod Touch. That’s it.

Technically, this blew me away. I started thinking about how a traditional head unit works, how it gets power, turns on amplifiers and gets sound to the speakers. There are usually separate channels for the front and rear speakers, and sometimes an output for the subwoofers. Using an iPod meant that you wouldn’t get a traditional surround sound with front and rear channels, but you would get stereo from side to side, even if you used a headset adapter. The only thing you’d have to wire would be a way to turn on the amplifier, but you could do that with a relay from the ignition.

This concept is going to be huge among classic car and truck owners. That’s because most older cars can’t fit modern stereos, so they require some cutting to the factory dashboard. That’s a big no-no among hardcore enthusiasts, so most of them install the stereo in the glove box or in a custom box under the dash. By doing this with an iPod touch, they don’t have to do any cutting, and have something small and portable that can come with them anywhere they go, adding to the security of it all.

What do they give up making this trade? Well, there’s no FM radio, but there is navigation (if you use an iPhone, anyways), a video player, plus thousands of music selections on hand without carrying CDs. And technically, you could get satellite radio if you have a constant wi-fi connection, which although unlikely, might be an option if you’re parked for long periods of time.

I think we may be seeing more of these installs in the future. It’s not the perfect option, but for the builder who wants a simple and clean stereo without any fuss, this is an easy way to do it.