by Lorraine Barte Nepomuceno 13 years ago8 months ago

There’s always been something strange about me and alarm clocks: in College- and, I’ll admit, even way past that- I required no less than three clocks to get me up, each one set about a minute apart. I’ve been known to turn an alarm off and go back to sleep, and not remember a thing about it hours later- when I finally do get up, freaking out and cursing because I’m going to be late.

I’ve been late many, many times.

This no longer rarely happens now, thanks to this gem of an iPhone app: Relax Alarm Clock Pro. 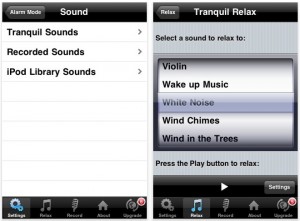 Formerly known as the Tranquil Alarm, Relax offers up a “soothing ambiance environment” in the form of 70 “gentle” sounds, including Wind Chimes, Bamboo Flute, Beach Waves, and Rooster (which is perhaps not so gentle).

At first, I didn’t think anything gentle could wake me- my husband likes to joke that I need one of those army boot camp guys to come and shout in my face in the morning- but for some reason, Relax works for me.

There are several upgrades you can purchase for Relax, including the ability to use any of the songs in your library, a weather forecast, news and stock tickers- although these seem to go against the idea of “relaxation” for me- and additional sound packs.

Relax Alarm Clock Pro is currently $4.99 at the App Store, although they do have a free version you might want to take a look at first.