iPad Versus the Competition 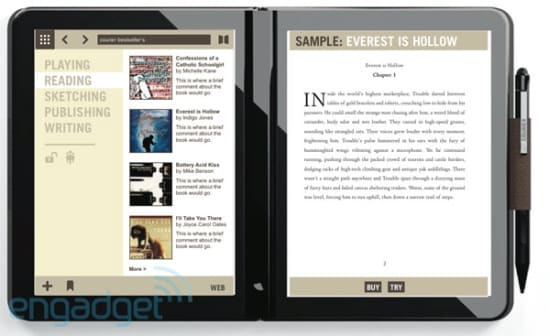 Many people have accused me of being an Apple fanboy. Although I do really enjoy using Apple products, I definitely see the value in other devices not made by Apple that function better. That was the case for me ant the Courier, pictured above.

Microsoft never officially came out and said they were making the tablet device, but everyone sure was excited about it. Before the iPad was announced there was the Courier, and people were all over it. I wanted one, that’s for sure, and I don’t even like writing with a pen. Yet even with the success of the iPad – or maybe because of it – Microsoft has decided to temporarily pass on the Courier, and focus on other products.

Then we’ve got HP’s slate design. It’s another cool piece of equipment and on the surface, it looks pretty powerful. It has USB ports, a cool touchscreen interface, and all sorts of things that make the iPad look slow in comparison. Well, except for that whole booting thing. The HP slate runs on Windows 7, and is a full computer. So if you want to pick it up and check out a movie real quick, you’re going to have to go through a load time. And even if you’re just waking it from sleep mode, it’s still not that instant-on feeling you get from the iPad. But more importantly, the fancy touchscreen interface is just a program from HP that sits on top of Windows 7. This problem has led HP to decide to go with Android instead of Windows, but I haven’t heard a release date as of yet.

I’m not saying the iPad is perfect. In my short time with one I’ve learned that it’s a really cool device that I’m not sure what to do with. I originally felt like it should sit on my desk like my other software, but really I think its home is in the living room. It’s more of a social device than a desktop computer, and should be treated as such. Yet it’s so much better than anything else currently on the market, and, at least for the near future, anything to come. Sure, the Courier could come out and blow our minds, and the HP slate could kick ass like no other. But the iPad is here now, not in the future. That puts the competition behind the 8-ball, and Apple on the pedestal. Now it’s about who’s going to be the first to knock them down.