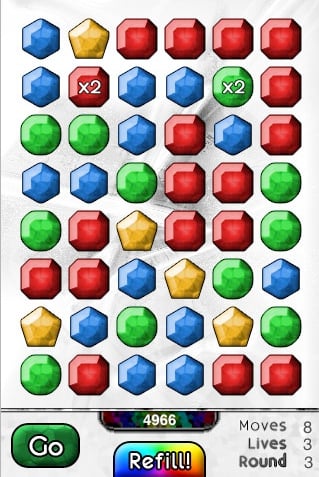 Many developers has ventured over to the Mac to develop for the iPhone and iPod Touch since the announcement of the App Store earlier this year. One of those developers is Brian Peavler, who has recently completed his fist app – a game called “Refill” that you can find in the App store for ($0.99 for a limited time).

I got a chance to talk with Brian about his game, developing for the iPhone and more…

Q. Let’s start at the beginning. How long have you been a developer and what motivated you to develop for the iPhone?

I have been programming for about 13 years, and I have been in the software industry for a little over 8 years. I started with C and Pascal in high school, Delphi when I first entered the industry, and now .NET and web technologies are where I spend my time in my “day job”.

I’ve always wanted to write my own software, games specifically. The iPhone was one of the greatest opportunities I’ve seen to do that thanks to the App Store. Having the burden of distribution so readily handled by a 3rd party, and having a relatively unchanging platform to ease product testing really allows an independent developer with limited resources like myself the chance to get quality products into the hands of customers at a manageable cost

Q. How was your first Cocoa programming experience? Do you prefer coding on a PC or Mac (remember you are on an “Apple” blog 🙂

Talk about putting me on the spot right off the bat!

Cocoa was a lot different than my previous development experiences. There was quite a bit of a hump at first in learning Objective-C and the way Cocoa projects work in general. Once I got past that though I really found my coding to be highly productive. Thankfully I had friends from out weekly “NSCoder Night” meetings to help me get up to speed quickly.

I don’t really think I could say I prefer one to the other. I was much more pleased with the experience than I expected, being such a long-time PC user. I won’t be abandoning either of my Windows or Linux boxes any time soon, but I am glad to have added Mac to the mix. Cocoa itself, however, has been a joy.

Q. So how did the creation process start for you? How did you get the idea for “Refill”?

Refill actually came about by accident. I had another game I was working on that was much larger in scope and in a completely different genre. One day I started experimenting with graphics, animation, and the touch interface as simply an iPhone development learning exercise. I created a grid with moveable multicolor blocks. As I was moving them around I started having a few ideas pop into my head about how this simple concept could be turned into a fun game. From there it was just an iterative process of massive amounts of playtesting, tweaking, and adding in of features.

Q. Can you explain to us how the game is played?

You have a 6×8 grid of gems of varying colors. You slide the rows or columns in order to line up the colors into a full row or column of the same gem color, sort of like a Rubik’s Cube. Once you do this you hit Go, get rewarded for rows/columns/squares, and certain gems are removed with new gems replacing them. Failure to create a row, column, or a 3×3 square of matching colors results in a loss of a life. Run out of lives and the game ends.

There’s a couple of major catches though. The first is that once you move a row or column it becomes locked for that turn, with the option of undoing the last move made. The second is that you only get so many moves per turn. As you get further into the game and more colors appear this will get more challenging. The game compensates a bit by giving you more moves as the number of colors increases.

The final component to the game is where it gets it’s namesake: the Refill button. It’s inactive when the game starts, but if you play well it lights up. When you use a Refill the entire board gets repopulated with a new set of of gems with the extra benefit of having one less color on the board than before. Additionally a Refill will clear all existing board locks. Early in the game this can be your express-lane to the more challenging rounds. Once you get to round 10 saving your Refill can by the only way to survive.

There’s a beginner mode available for those who find the 6-color challenge of round 10+ too difficult.

Q. How do you like the App Store concept? What are the pros and cons, and what’s your favorite aspect of the store?

I think the App Store is a really great concept and it’s no surprise that others are already trying to create their own App Store.

To me the greatest thing about the App Store is the accessibility. You click a button on your iPhone or iPod Touch and it’s right there. You can find, research, and purchase products extremely quickly and efficiently. This is great for both consumers and developers alike. In addition to that, the ability for even the smallest developer to quickly get products to customer gives many people developers opportunities they never had before.

Unfortunately this high level of accessibility and ease of distribution also makes for a very quickly saturated market. Every day new products are released of all levels of quality and price. It’s an ecosystem that changes very quickly and week to week can look very different. One week you can have a hit and a couple weeks later it’s been displaced and forgotten. This gives developers a very short window in which to succeed in many cases.

Q. Are you planning to develop Refill for other platforms like Google’s Android OS?

I’m definitely looking at Android and I think most mobile developers are at the very least keeping their eye on it. Like Apple, they are offering an “App Store” which is a huge draw for small developers. Whether or not I will specifically port Refill or not I have yet to decide. I may look into porting it to the Mac at some point if interest is high enough.

Q. What do you think are some of the biggest hurdles for indy developers on the iPhone?

Exposing potential customers to your products and giving them a compelling enough value proposition to purchase your product. With such a surge of competition constantly it can be really difficult to get noticed and I think a developer really has to do something special to get people to be willing to take a chance on you. Those are factors that are going to weigh heavily in my future development decisions.

Q. Overall are you satisfied with your experience developing for the iPhone thus far?

I had a few frustrating experiences early on, mainly with the administrative aspect of getting setup to distribute on the App Store. Those obstacles are behind me now though and going forward I can focus on creating games. I think that it’s a wonderful platform with a lot of capabilities that really makes for some exciting creative possibilities. It’s been fun so far and I’m looking forward to doing even more development on the platform in the future.

I want to close by thanking you, Michael, for giving me the opportunity to talk about my experiences and about my first release for the iPhone. I hope everyone will give Refill a try and let me know how the feel. I’m always looking for ways to improve the product further. It’s on a limited-time sale right now for just under a buck on the App Store.

You can get Refill in the App Store right now.