Indiana Jones and the Mac Desktop of DOOM! 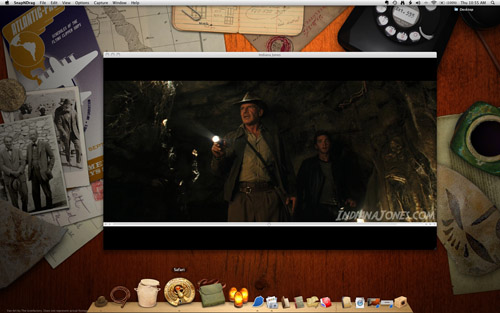 Today is a day that many people have been waiting 19 years for. Today, the 4th Indiana Jones film, “Indiana Jones and the Kingdom of the Crystal Skull” officially hits theaters.

In conjunction with Lucasfilm, the Iconfactory has produced a set of icons for each of the 4 films, and I have to tell you, the ones I’ve seen so far are simply some of the most beautiful icons I’ve ever seen.

You can download the icons for the first 3 films right here, with the “Kingdom” icons coming soon. If you use Iconfactory’s Candybar application on your Mac, you also get a customized Dock for each film as well – allowing you to completely trick out your Mac with Indy flair.

To top if off, the Iconfactory has also produced a fantastic desktop wallpaper for your desktop and iPhone called “Indy’s Desk”.

When you combine them all you get the ultimate Indy desktop experience!