In “I Must’ve Missed This One” News: Monoprice Discontinuing Apple... 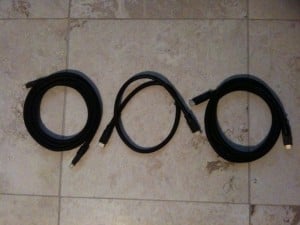 I love Monoprice. There are a few reasons why, but most of it comes down to their great customer service and low prices, both of which I’ve spoken about before. But now, it looks like they’re not going to be selling Apple cables anymore, and the reason why takes a bit explaining.

First, there’s a Bloomberg article about the topic. Let’s start there:

â€œMany are of inferior quality and reliability, raising significant concerns over compatibility with and damage to Appleâ€™s products,â€ Apple said in the complaint, citing a user comment that a charger from one of the companies drained his iPod rather than replenishing the battery.

The suit is an example of the tight grip Apple keeps on its products, including approval of accessories and applications. Apple has a program called â€œMade for iPodâ€ under which manufacturers get a license to sell accessories for devices. Apple collects a royalty of 20 percent to 25 percent from each sale of a licensed accessory, according to Shaw Wu, an analyst with Kaufman Bros. LP in San Francisco.

Wow. So this must’ve spooked Monoprice, I’d imagine. Guess it did, because it prompted this response via their Facebook page:

Unfortunately, all the iPhone/iPod cables and chargers are currently considered discontinued. I can not promise that we will be offering any new items to replace them anytime soon. For now, the only iPhone/iPod accessories we are selling are the cases and screen protectors. Sorry for any inconvenience this has caused.

And that was just today. A few days ago, it was this:

Kyler Pace: What happened to your iPod accessories, and earphones w/ built-in mic!!??

Wow. Well that certainly sucks, because I really liked their selection. Guess if you missed this news when it happened as I did, you’re just as disappointed as I am.