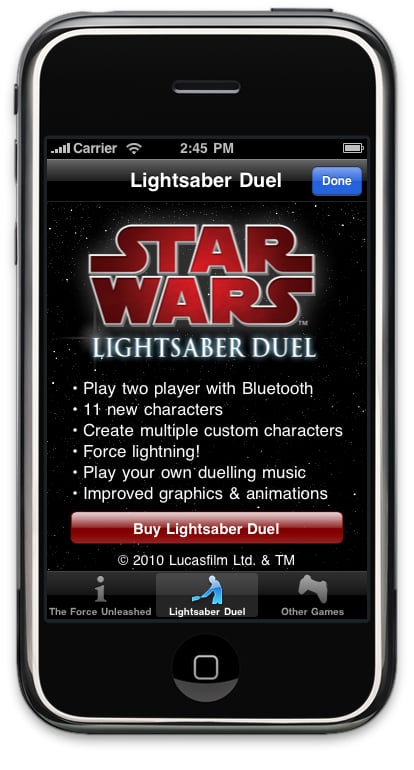 When I was a kid, I used to play lightsabers with cardboard tubes all the time. I always played Luke, while my douchebag neighbor Bryan played Darth Vader. I always won of course, but that’s the way it is when I’m Luke. Anyways, this new game from Lucasfilm is going to take the pretend game up a notch. Mobile Entertainment is reporting that the iPhone app will be released soon, and better yet, it uses Bluetooth to sync up two iPhones for the duel. From the article:

Yes, that means people will be able to swing their iPhones at one another with officially-licensed lightsaber sounds, with Bluetooth connectivity.

The app is the follow-up to 2008’s Lightsaber Unleashed, which was itself THQ’s revamped version of an unofficial app called PhoneSaber.

The new Lightsaber Duel app is due out early next month (April). Besides the two-player Bluetooth mode, it will feature 11 new characters from the Star Wars universe, as well as the ability for players to create multiple custom characters.

So let’s see. 11 characters. That’s a pretty wide range, but let’s guess who a few of them are:

Well, I think those are gimmes. Not sure about the other 4, but maybe they’ll throw in some references to game-only characters, or someone from the Clone Wars series on Cartoon Network. Either way, this is a big step up from a cardboard tube.