History of the Mac 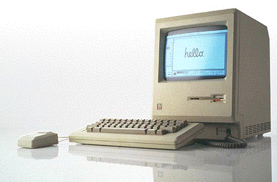 I have to admit that the Apple fan that I am, I am a recent switcher. The first time I started to use a G4 eMac as a personal computer was at work early 2005. But having left the corporate grind for a mobile/telecommute/freelance writer’s life left me without a Mac for a few months until I got my own used PowerBook just a few months ago.

I’ve had many dealings with Apple computers in the past, though (and with their owners, of course). And each encounter was a marvel to the senses. I’ve always been fascinated by these lovely computers, from the way the hardware seems to be like functional sculptures, to the way the Mac OS seems to read my mind and just do the things I want it to do.

So to make up for lost time (that is, the time I wasn’t on a Mac) and considering I’m relatively too young to know about the Mac since its birth (I was still in preschool during the Macintosh’s launch in 1984), I have to read up on my Mac history. Among the resources I often refer to is LowEndMac, which has a series of articles that covers the highlights of each year since the Mac’s introduction.

On January 24, 1984, Apple announced the Macintosh to their Board of Directors and to the world. And the computer world has never been the same.

A year earlier, Apple had unveiled the $10,000 Lisa, the first business computer with a graphical user interface and a mouse. The Lisa never caught on, but Apple was enamored of the concept.

It was an era of conformity. Although you could still buy an Apple II, TRS-80, Commodore, or CP/M computer, MS-DOS was the de facto standard.

Apple made a bold move, thinking different long before it became an ad slogan. And the rest, as they say, is history, a history Low End Mac examines in a series of articles, each covering one year in the life of the Macintosh.

The articles highlight the innovations (or lack thereof) introduced each year. These also give some personal perspectives on the hot issues during those times, including those that pertained how developments affected Apple as a company.

Here are some notable highlights I’d like to cover in brief.

What has Apple given us this 2006? I’d say a lot. From the release of Intel-powered Macs like the MacBooks and MacBook Pros, to the MBP Core 2 Duo upgrade, and even the official support for Windows in Intel-Powered Macs, among others, I can say 2006 is a very good year for Apple.