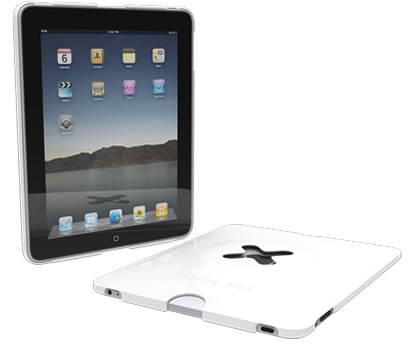 The iPad is a unique device. For some people, it’s become a product that they carry around every day, and for others, it’s a utilitarian thing that serves multiple purposes but is still very specialized. For example, some people really enjoy using their iPad in the kitchen, so that they can access theirÂ recipesÂ and videos while they’re cooking. Nothing wrong with spending time trying out a new recipe while also watching Die Hard 2, right? The problem here has been that unless you want to permanently dock your iPad to the wall, there aren’t a lot of clean stands that look really cool while also staying subtle. Fortunately, there’s a solution to the problem, and it’s called The Wallee.

The idea is pretty cool. It’s a plastic case that snaps onto your iPad, but it has a bump out in the middle of the backside with a large “X” cutout in the middle. The X that fits into that hole is a plastic wall mount that bolts onto your cabinet, counter, or whatever else you want to mount it to. When you want to put the iPad on the mount, just align the X mount with the X hole, turn the iPad, and then it’s locked in place. If you want to take it off, just untwist it, and you’re good.

This isn’t the perfect iPad case, because after all, it does have a giant pocket in the back of it which could hold dirt or whatever. But if you use your iPad as a home automation control, home stereo system, or for watching your movies while you cook, then this could work for you. The Wallee is $49, comes in five different colors, and will be available in August.