Hands On with the KarasKustoms iPhone 4 Case 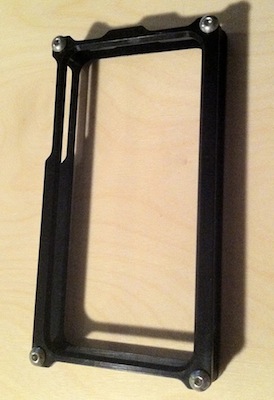 A few days ago, I wrote a post about an aluminum case for the iPhone 4 made by KarasKustoms. I got an e-mail that night from one of their employees, and a few days later I was at the shop, checking it out first hand. Then they gave me a model for my own use free of charge, and I’ve been using it for a bit. Here’s the update.

The case itself has a ton more R&D into it than I ever would have imagined. First off, they come in various shades, and to get those colors they had the aluminum anodized. Although anodizing can be thick, it can also scratch if not taken care of carefully. That was my first concern, but it turns out, that was something they already thought of. The two halves of the case are held together with button screws, which also lift the frame off of the surface. This prevents scratching of the anodizing when you set it down.

But the thought behind the case is better than that. The iPhone isn’t held in place by the upper and lower halves clamping onto it as you might expect. Instead, the corner supports on the case are positioned such that the case almost floats between the four corners. This means that the aluminum isn’t going to scratch the phone, and doesn’t even touch it. There are also little indentations for buttons and access.

So how is it in use? Well it’s a bit weird to get used to at first, because there is a top and a bottom to the model, but no sides. You get used to this fairly quickly, but it is a small adaptation. It adds little thickness to the phone, but it does add width, more so than most cases.

Ultimately, it breaks down like this: it’s the first aluminum iPhone 4 case released on the market, and it’s one of the cheapest. If it were up to me, I’d buy one tomorrow.